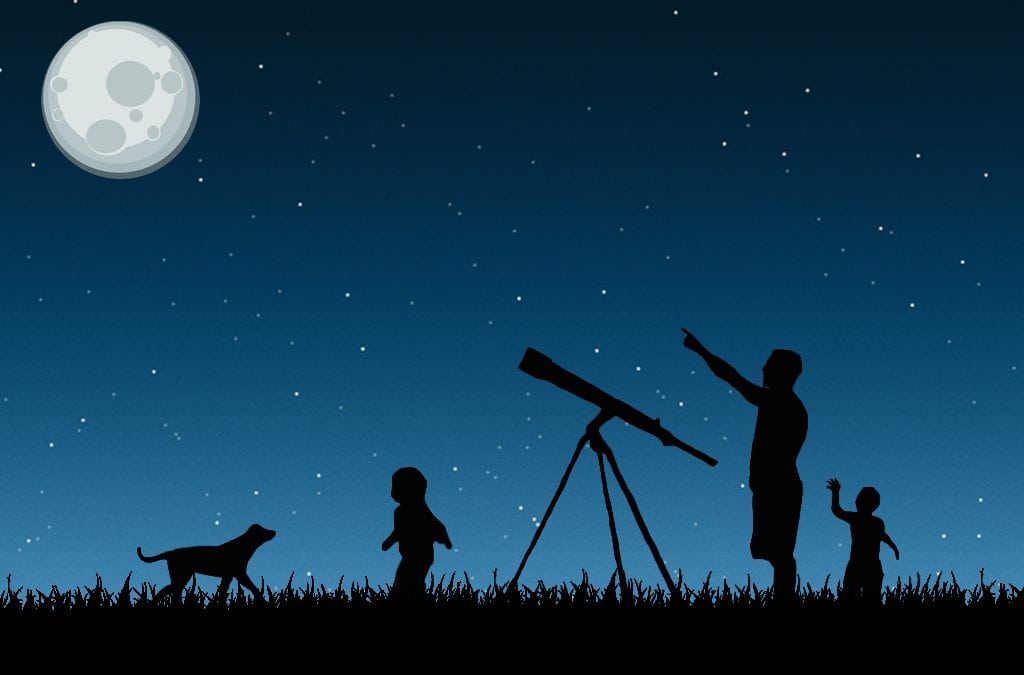 When I was little and had something on my mind, my Dad would often tell me to “find some perspective”. These were wise words, but it took a few good years of adult life to fully grasp the significance of his advice.

Perspective is wonderful. Its literal definition is “the angle or orientation from which an observer views an object or event”. Applied practically, it means that there are many different ways we can look at a situation. My Dad was telling me to step outside my mind and look at the problem from some zoomed-out view; approach it from a different angle. Once I’d sat and pondered from that metaphorical cliff of fresh perspective, the issue wouldn’t be a big of a deal as it had once appeared.

Perhaps this was why I was drawn to Astronomy from an early age. It gave me a break from obsessing over the daily stuff. Even though I’d be physically limited to terra firma, it gave my mind opportunity to explore on the ultimate scale – the scale of the whole universe.

There’s a reason why we love those animated videos of celestial size comparisons, those ones that zoom out from Earth to the Solar System, to the Milky Way, then out into the Local Group of galaxies and beyond into the majesty of deep space. We love these animations because they make us do something I like to call “Mental Astronomy”. It’s an exercise that simultaneously reminds us how tiny we are, and yet how BIG we can think. Our imaginations can get into their own little spaceships and fly about faster than any light-speed-limited particle to wherever we please. It’s a delicious escape to a perspective of time and space only the universe can offer us.

Astronomers over the last millennium have gifted us information to power our imaginations. Our duty is to use this information to gain perspective as often as we can. When you look up and expand your mind to cosmic scales, it makes the humdrum of human interactions seem so utterly inconsequential that they momentarily drop away. And because our minds are like a muscle, this big-perspective thinking, if exercised regularly enough, can help make us impervious to the silly stuff.

In a dispute with your neighbour? Go spend some time over with Alpha Centauri, our closest star. It’s so far, that if the sun was the size of a tennis ball in London, Alpha Centauri is another tennis ball 1400 km away in Rome. That’s some serious personal space.

Been upset by a hurtful comment from a friend? Well, our friendly galaxy has 100 billion or so stars like ours who would love to be thought about. In fact, next time you feel any negative emotion about something that’s not literally life-or-death (and sometimes even then), get in your spaceship and take a flight.

If we’re regularly reminded of the grandness of the cosmos and the fragility of our tiny planet, we might just gain the perspective we desperately need to stop being so unpleasant to each other. We’d remember the only thing that really matters: keeping human consciousness alive and learning and expanding.

And what about our world leaders? After all, they surely needed to be big-thinkers in order to become leaders in the first place.  As Apollo 14 astronaut Edgar Mitchell so eloquently said:

“You develop an instant global consciousness, a people orientation, an intense dissatisfaction with the state of the world, and a compulsion to do something about it. From out there on the moon, international politics look so petty. You want to grab a politician by the scruff of the neck and drag him a quarter of a million miles out and say, “Look at that, you son of a b****.” “

It’s never been more essential to remind our leaders of this perspective, and to elect ones that already see it. If we can get them thinking again of their childhood interstellar day-dreams, then perhaps they’ll see the futility of their neighbourhood disputes too, and give minds here on Earth less reason to worry and more time to dream.

This video should get you off to a good start!