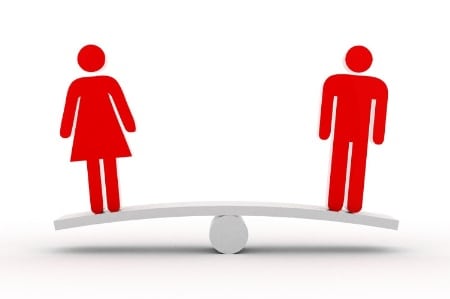 There’s been renewed discussion within the poker community on the topic of women-only tournaments and other female focussed marketing strategies, generating a lively 2+2 forum debate on whether they should exist. It’s quite clear from the healthy field sizes (the WSOP event gets >1000 runners for example) and the fact that some regulars rarely play “open” tournaments, that these events are much appreciated by the people they are designed for. The reasons for this popularity are numerous, the most noticeable and controversial being the treatment of female players at the live or virtual felt.  This isn’t what I want to focus on though; any discussion of gender-based hostility or derision will only confirm the beliefs of those who already fight against it, or go over the heads of those that believe that these ill-treatments aren’t harmful or are too rare to be relevant.

Instead, I want to examine the logical arguments commonly used by those for and against women-only tourneys. As many have correctly pointed out, the reason businesses market towards under-represented demographics is because they see an opportunity for growth. Women are a massively under-represented demographic in poker, with an average of 0.7 players at a live poker table being female*. As such, poker companies like PokerStars, WSOP etc make the correct business decision to target these groups in ways they find to be most effective, which include women’s-only events and dedicated female community blogs.

In an ideal world, there would be no need to market mental-only disciplines such as poker to women – but despite massive reductions of gender stereotyping and inequality over the decades we are still a long way off those ideal equal female/male ratios. And what if “over-marketing” those disciplines to women are likely to speed up the arrival of that ideal-ratio world? Prohibiting it would then be detrimental to that cause.

What I find surprising is that many people who choose to be active in poker forums would argue so strongly in favour of a moral ideology when it is very likely conflicting with both their goal of growing poker, and of creating a gender-equal poker world by slowing down the equalisation process! It seems logical to apply some flexibility in that ideology to provide a practical solution to both of those issues.

However if one’s goals and values are completely unconcerned with the growth of poker’s player base, then it could be quite reasonable to take exception to unequal marketing methods, particularly if its felt that other demographics are being damaged by those methods. The trouble with that argument is that there’s little evidence of real harm being done to non-female players. As such, the logical scale is tipped in the direction of letting the tournaments exist until poker becomes more balanced.**

* this is my best-guess estimate from experience. The number can obviously vary above and below this significantly.

** I tried very hard not to put a dumb “balancing our range” pun anywhere in this blog. I failed.