A Shirt in a Teacup – my perspective on Shirtgate 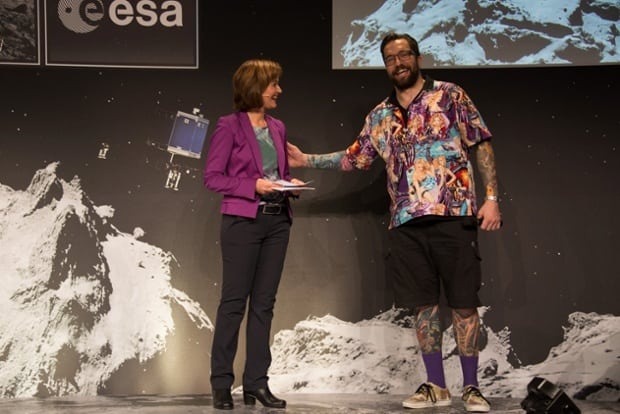 So last week humankind did something really cool. For the first time in history, we managed to successfully land a spaceship on a comet. Launched in 2004, a spaceship named Rosetta flew for ten years, covering over 4 billion miles via a stunningly complicated path around various planets and asteroids in order to launch onto the right trajectory for its comet rendezvous. Once there, it orbited around it for a few months, scanning for the best place to land. And just last week the little ship made physical contact, and a new page in history.

Meanwhile, this mind-blowing achievement was overshadowed by a shitstorm back on Earth. It was about a shirt that one of the lead scientists on the mission, Dr Matt Taylor, chose to wear during a major interview about the mission. It was shirt featuring various scantily clad, cartoon superhero-esque ladies, seemingly pieced together out of a twelve year old’s favourite comic book. If you haven’t seen the pictures yet, have a google. It’s loud. It’s garish. It’s distracting. Some might call it an eye-sore. Is it morally offensive? Oh come on.

As you may have heard, soon after Dr Taylor’s interview was aired he received significant criticism from various viewers that his shirt choice was sexist, demeaning and further reinforced negative stereotypes of women. Furthermore, they claimed it would discourage women from choosing careers in science because of fears of “nerdy” guys still holding those views. It just doesn’t, and here’s why: most modern women who are passionate about science or any similar male-dominated industry (hello, poker) are by definition a nerd in some way. She has most likely dressed up as a superhero at a cosplay event, read comics, had blue hair, loved Star Trek… you get my point. In short, these women either couldn’t give a damn about his shirt, or more likely, they want to own it.

Sexist views and gender inequality are still undeniably present in our society. However, the strong reactions of a few about something so trivial as this only serves to create an understandable backlash towards the feminism cause, and possibly hinder further rational discussion on a topic that still very much requires it.

However, as with most “x-gates” a silver lining exists, and this one is the massively raised profile of the Rosetta mission. It almost certainly gained the attention of a demographic that wouldn’t normally look twice at an article of positive scientific advancement. And whilst we’ve learned that scientists aren’t always the best dressers, they can be really great at advancing our understanding of everything. So thank you, Dr Taylor.